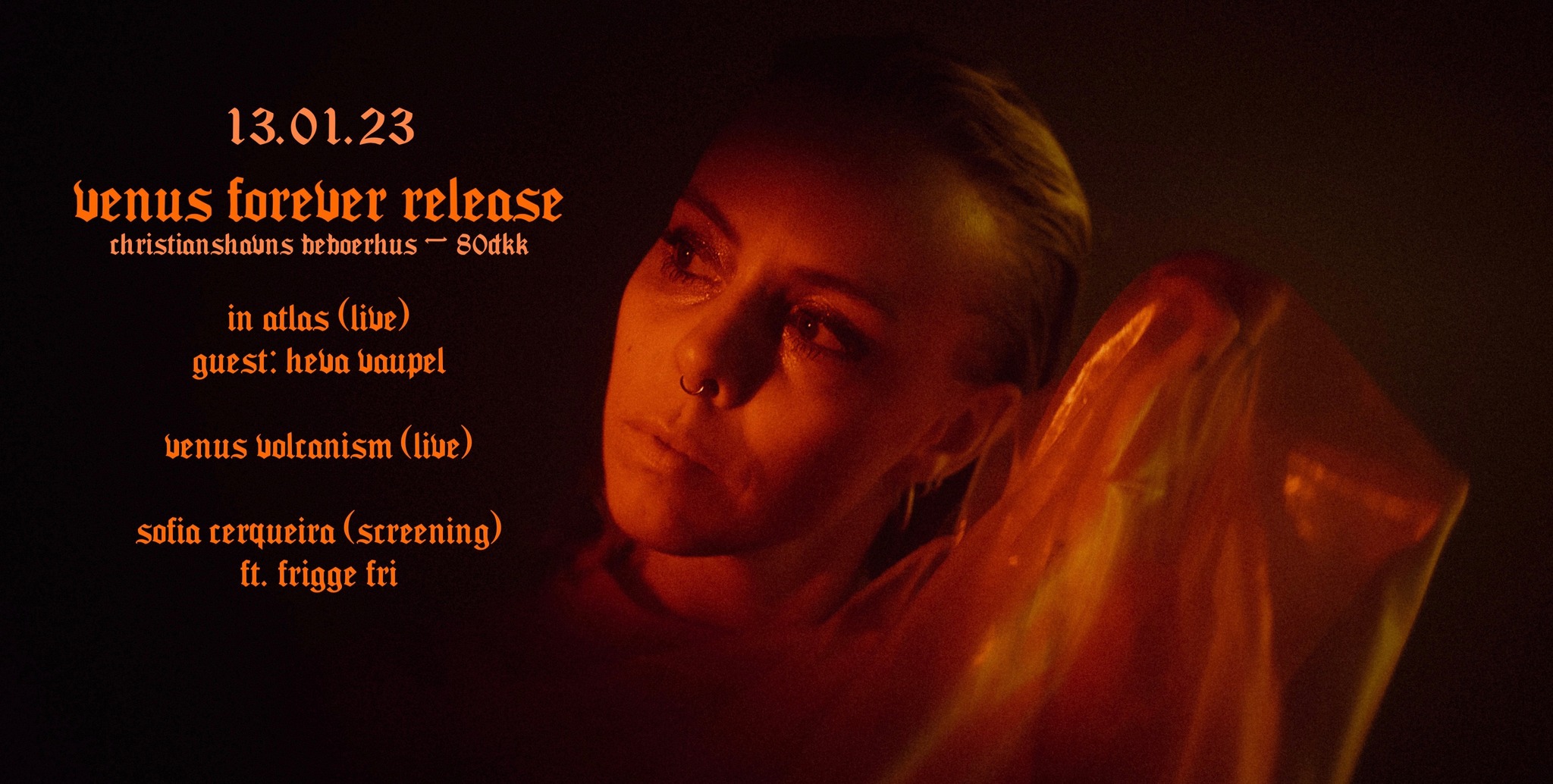 I’m beyond excited to announce that my debut album ‘Venus Forever’ is coming out on Friday 13th!

I would love it if you would come and celebrate with me! The album is a celebration of platonic love, explored through my relationship with ‘Venus Volcanism’ with whom I share the band ‘V.V.I.A’ and it means the world to me, to be able to bring her over for this special occasion. On top of that, my beautiful friends Sofia Cerqueira and Frigge Fri will be presenting a poetic and visual piece for the occasion as well.

In Atlas:
‘In Atlas’ presents her first solo album ‘Venus Forever’.
In 2019 ‘In Atlas’ lived in Greece and shared the Athens based post-punk outfit V.V.I.A. with her Cretan music partner and roommate ‘Venus Volcanism’. By the end of 2019 they had just finished their debut album. As they were preparing to go on tour with it in the beginning of 2020, global lockdowns came along. Circumstances forced ‘In Atlas’ to stay in Copenhagen, physically separating the platonic couple. Steeped in uncertainty and feeling like a massive part of her had gone missing, In Atlas delved into the theme of platonic love as the foundation for her first solo album. She explores the facets of love without a body, and uses the album as a catalyst for the emotions that arose from this state of longing. ‘Venus Forever’ is an emotionally charged art-pop record, weaving euphoric synths and thunderous drums, with oneiric field recordings and haunting vocals. It is seething beauty and blasts of longing, it is wildfire and its brittle remains.
Heva Vaupel will accompany ‘In Atlas’ on stage for the occasion, playing Cello.

Venus Volcanism:
Venus Volcanism will present her first solo mini-album “Rizitiko” a sound mosaic made up of field recordings, synthesizers and traditional melodies of 5 Rizitika songs. Folk songs from her native island Crete are the basis for this work. ‘Rizitiko’ evolved from Rasouli’s thesis titled “the music performances based in traditional dialect focuses on the healing ability of sound”. The songs were created and sung by folk troubadours. Expanding on these oeuvres, Rasouli seized on the idea that the melodic use of voice is the oldest form of therapy in human culture. This primary and ritualistic material was intertwined with electronic and natural ambient soundscapes. Traditionally sung by men there are numerous reasons to believe that many of the songs were initially created by women. To sing them in a female voice projects a different approach to the traditional rendition – one closer to that of a lullaby.

Sofia Cerqueira & Frigge Fri:
Visual and poetic exploration of cohesion, treasures, spirituality and fire – a made for the occasion creative collaboration between writer Sofia Cerqueira and filmmaker Frigge Fri.

This performance will be in danish.