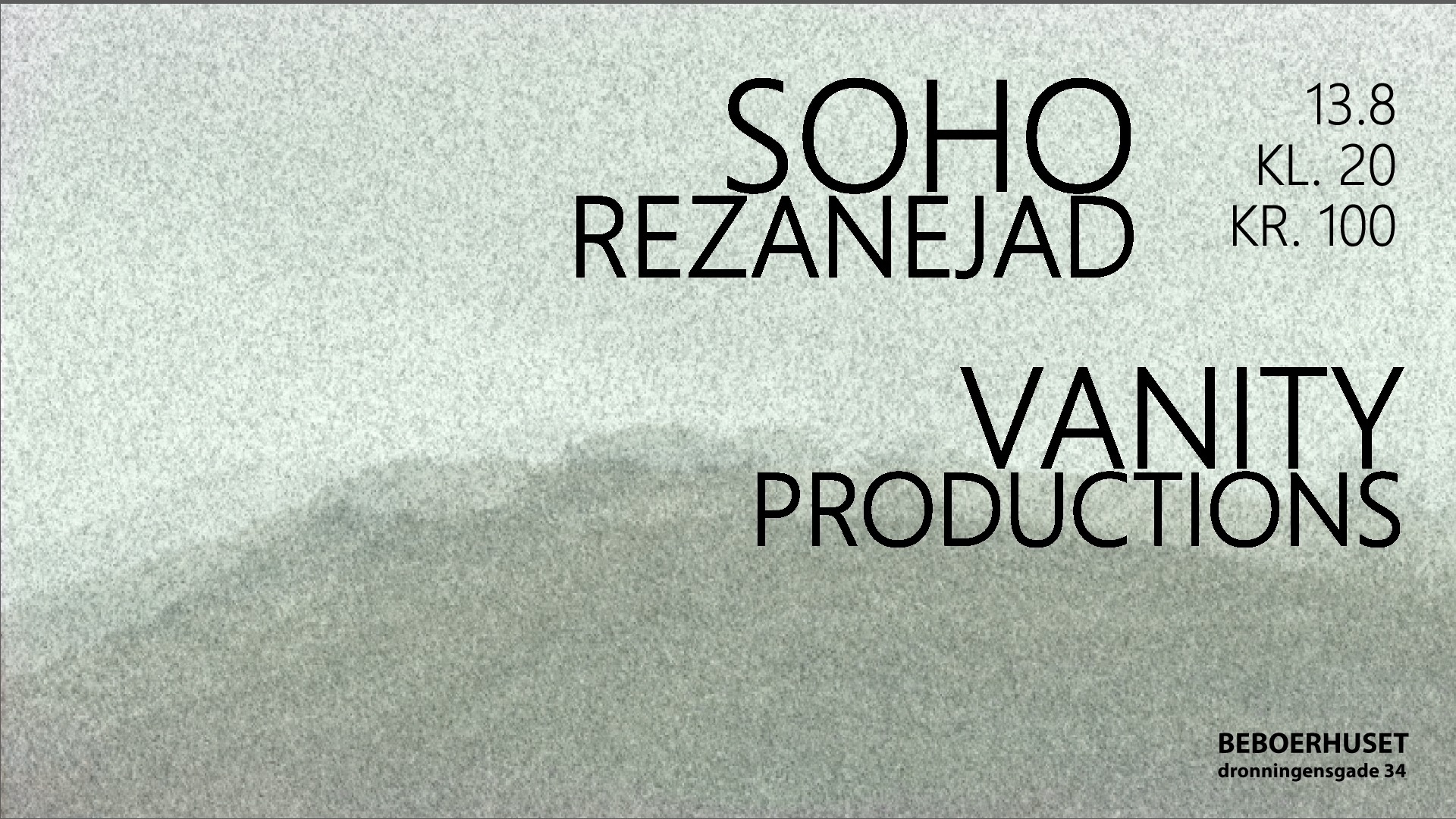 Iranian multi-disciplined artist, Soho Rezanejad (b. 1989, New York City) is a composer and vocalist whose practice is a testament to versatility. The tongues, scales, and registers in which she sings have varied through each of her releases.

Rezanejad’s work is mutable, often narrated in mythological storytelling and disclosed in a dizzying spell of genres. Her debut full-length album, Six Archetypes, accompanied by the intense visual drama of a series of music videos, paint a kaleidoscopic cast of unfolding characters.

This same unwavering commitment to change is also found across the diverse themes and instrumental palettes she has explored in her visual and sonic works. From her performance series, Crow Without Mouth, based on episodic plays, to the vigorous sampling of natural phenomena and hymn-like aria compositions on her two-volume album, Honesty Without Compassion is Brutality.

Vanity Productions is the solo moniker of Christian Stadsgaard, a crucial figure in the contemporary Nordic electronic and experimental music scenes. Standing at the helm of the label Posh Isolation with Loke Rahbek, Stadsgaard is responsible for one of the most consistent and compelling labels to both define and elaborate the many productive sides of the underground in the last decade.

As a performing and recording artist his work with Rahbek as Damien Dubrovnik was a critical project in the contemporary noise milieu. More recently his collaborative work with Jonas Rönnberg as The Empire Line has gained significant notoriety. However, it’s as Vanity Productions that the full breadth of the emotive intensity of Stadsgaard’s work is felt.

Collaboration with the seminal artist Merzbow led to 2019’s ‘Coastal Erosion’ album for iDEAL Recordings, prefacing a recent series of works that take their cues from minimalist composition. His latest album, ‘But All Spiked,’ is the wistful realisation of his late activity.

With the innermost impulses of the Vanity Productions project derived from Stadsgaard’s longstanding presence in analogue noise music production and performance, the work that he now creates with a focus on digital soundscapes enlivens his grasp on the visceral expression of states of mind, beauty, and impassioned turbulence. Oscillating between electronic experimentation, atmospheric textures, and hypnotic dynamics, Vanity Productions directs tender forces with an assertive and impulsive streak. Often with a melancholic touch, Vanity Productions tells the stories of Tinder Romance in the age of iPad modernity.